Interviewed and written by David Dizon

Ten years ago, COP Pampanga members Rodel and Geraldine Medina feared they would go to jail due to a multimillion-peso debt. Now in the time of COVID-19, God has blessed their family with overflowing abundance – all because of a seed of 400 loaves of bread. 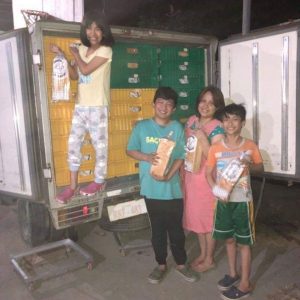 My interest in the baking business started in 2013 when I bought a cake for my 1-year-old. We have a member in COP Bataan who decided to sell her oven. Ang nakakatuwa doon, ang binayad ko doon ay hulugan pa. This was an old-style oven, plus mixer and steel plates. Those pieces of equipment, paid for in installments, were enough to start the business.

When we started, I didn’t get a baker. Usually, the experienced bakers have their own way of doing things so being the captain, it’s hard for me to make them do it the way I want it. So we trained our own bakers.

We had several challenges, some of which could have ended the business. We started baking pandesal, and got a lot of customers. We had a yaya who we trained to use the oven. One time, we asked her to heat the bread. When she opened the oven, the fire exploded in her face and she had burns. We thought that was it, that was the end of our business. But when she healed, she actually had better skin.

We started learning how to make loaves. Unfortunately, our first baker had an accident – he accidentally got his hand stuck in the dough breaker, causing a fracture. So we were back in the hospital again – every time we had an accident, we had to shut down the business for a month or two. But we kept at it. Because of that incident, we learned how to safely use the machine. We also made different types of bread – Spanish bread, cheese bread, cheese rolls, pan de coco. 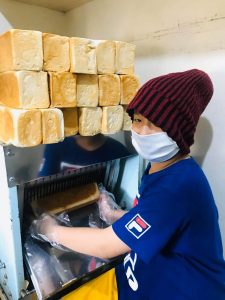 For years, we just sold our products in our bakery in Barangay Bodega, Floridablanca, Pampanga. But in 2017, I was diagnosed with breast cancer and started doing radiation therapy the year after. In 2019, the Lord revived a dream that my husband had to start distributing our products.

My husband Rodel told me: “What if there was a store in each town and city in Pampanga that distributed our loaves of bread?” Our target: deliver 350-360 loaves of bread every week to all the cities and towns in Pampanga.

During the time of my radiation therapy, my husband would bake the bread before driving me to the hospital in Angeles. We baked 500 loaves of bread, 700-800 pieces of pandesal and 300 burger buns every week. God is really amazing because when we started distribution, Rodel only delivered about 100 loaves of bread – we were so afraid that no one would try it. He would go to the barrios and offer a free taste. You have to understand our market: Pampanguenos are very particular, they will not easily switch to a new product unless it’s good. Soon, people started asking for our products. Our deliveries of 100 loaves of bread were no longer enough to meet demand.

In the same year, we tried selling burger buns, and again, it was a hit, from 100 buns, we started making 400 buns a week. It was slow, laborious work. We didn’t have a machine so we had to make each bun by hand, and this was on top of our daily production of pandesal. But our dream was big, in fact our goal was to take on the leading brand in the market. As the Sinach song goes: ” I know who I am, I know who God says I am.”

We started praying to God for wisdom and we found out there was a machine, a dough divider, that is used to make buns. A seller offered us her secondhand dough divider initially at a steep price. When she found out I was a cancer survivor, she gave me a huge discount on the dough divider plus 2 more secondhand ovens that were also available. It was really an unbelievable season of the favor of the Lord. 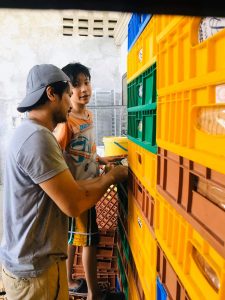 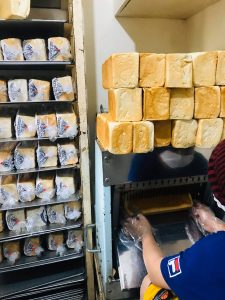 Last December 2019, a customer made a mistake with his order and asked if we could take back about 400 loaves of bread. Instead of selling the product, my husband and I decided to bring the loaves to Daily Manna in Tondo, Manila. We didn’t take a picture of the loaves though because we felt bad we had to use large cardboard boxes by a popular tobacco brand as containers. At the time, we had not yet bought crates for our products.

After we sowed those 400 loaves to Daily Manna, the blessings just started to flow. This was despite our existing feeds business being ravaged by African swine fever; while we used to move thousands of bags of feed a week, now we only sold 60. But we had nothing to worry about because our bread business was booming.

In 2019, we were only distributing our loaves to a few towns in Pampanga. At the start of 2020, we started expanding distribution to more towns and cities in Pampanga and all the way to Bataan. Even before the start of the Luzon-wide lockdown because of the novel coronavirus, we were already producing more than 500 loaves a week. Now we are producing 1,000 loaves of bread a day. Those 1,000 loaves, we can sell that in just one market in Bataan because demand is so high. Some of our dealers are even begging us for deliveries. If we wanted, we could produce up to 5,000 loaves but we set the limit at 1,000 loaves a day. Kailangan din namin magpahinga.

Every day, we start at 5 a.m. and don’t stop until 10 p.m. We used to sell more pandesal than loaves of bread but now, our loaves are our hottest product. Demand is so high that we now have a new problem, finding a source for the plastic bags for the loaves.

Ten years ago, we had to declare bankruptcy after our poultry business went under. We were P20 million in debt so we had to sell all our cars just to pay our creditors but we were still P18 million in the red. My husband thought he would go to jail. But God still made a way – our creditors agreed to write off the debt in exchange for our collateral, a piece of land that had less value than our debt. And because our creditors had no plans yet for the property, we still earned from it. Every year, they allowed us to plant crops on that land – sugarcane and rice – and harvest it, without taking any portion of the profit.

When I remember that time of our bankruptcy, I remember thinking: “This is the end.” But it’s not. It’s the start. Akala mo wala na pero ang dami-dami palang pinrepare si Lord para sa iyo. There was a time when I thought: “What will happen to us, to our employees? And we have bills to pay.” But God made a way.

Until now, my entire family is overwhelmed by God’s blessing. It is just as the Bible said in Ephesians 2:8-9: “For it is by grace you have been saved, through faith—and this is not from yourselves, it is the gift of God— not by works, so that no one can boast.”

I can’t make a boast and say: “Ang galing ko.” What we have is a gift prepared by our generous God because He loves to give gifts to those who love Him. When you seek Him first and His righteousness, all these things are added to you. There is no such thing as end of the road for you when you follow God, it’s the start of the good joy He has for you.