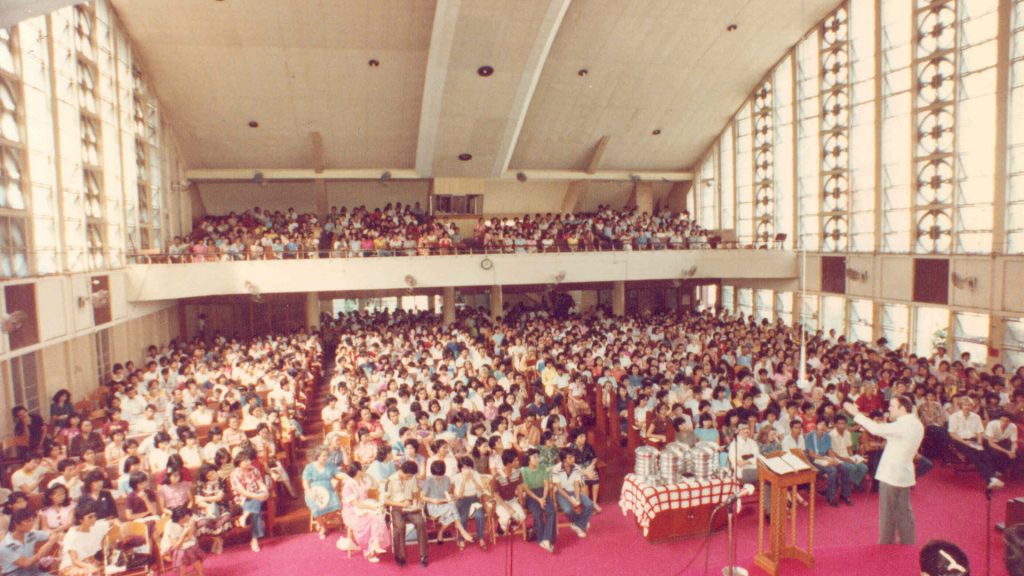 ABOUT THE CATHEDRAL OF PRAISE

The Cathedral of Praise (COP) is a church founded in Manila, Philippines, during the 1950s by Dr. Lester Sumrall. Standing as a living testament to God’s abounding grace and faithfulness, COP has grown tremendously over the years – with every gospel crusade, every church planted, every ministry group created – every soul reached in the Philippines and beyond. Now with five satellite churches and ten branches spread across the Philippines and abroad – in Hawaii, Dubai, and Abu Dhabi, COP as a church looks forward to the future with a commission to build 200 churches in 20 years, all across the Philippines and around the world. Praise God! 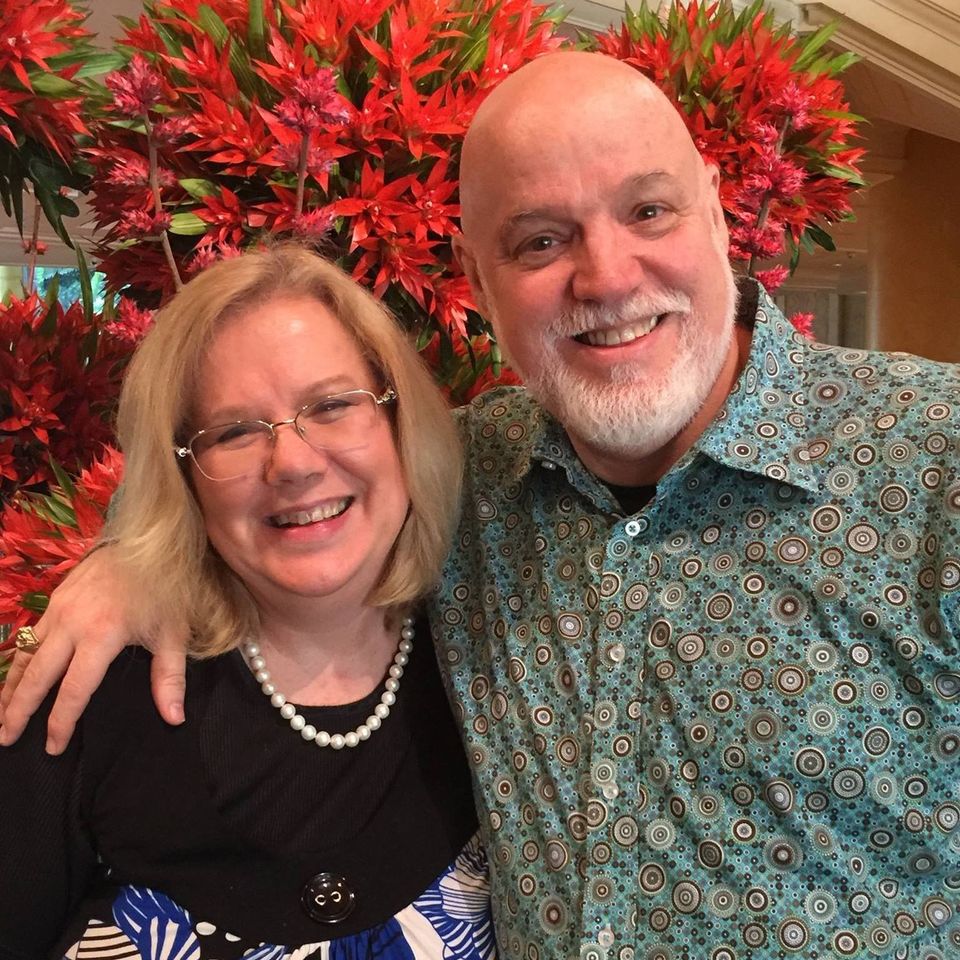 1954
Founding
Founding of "Christ is the Answer" 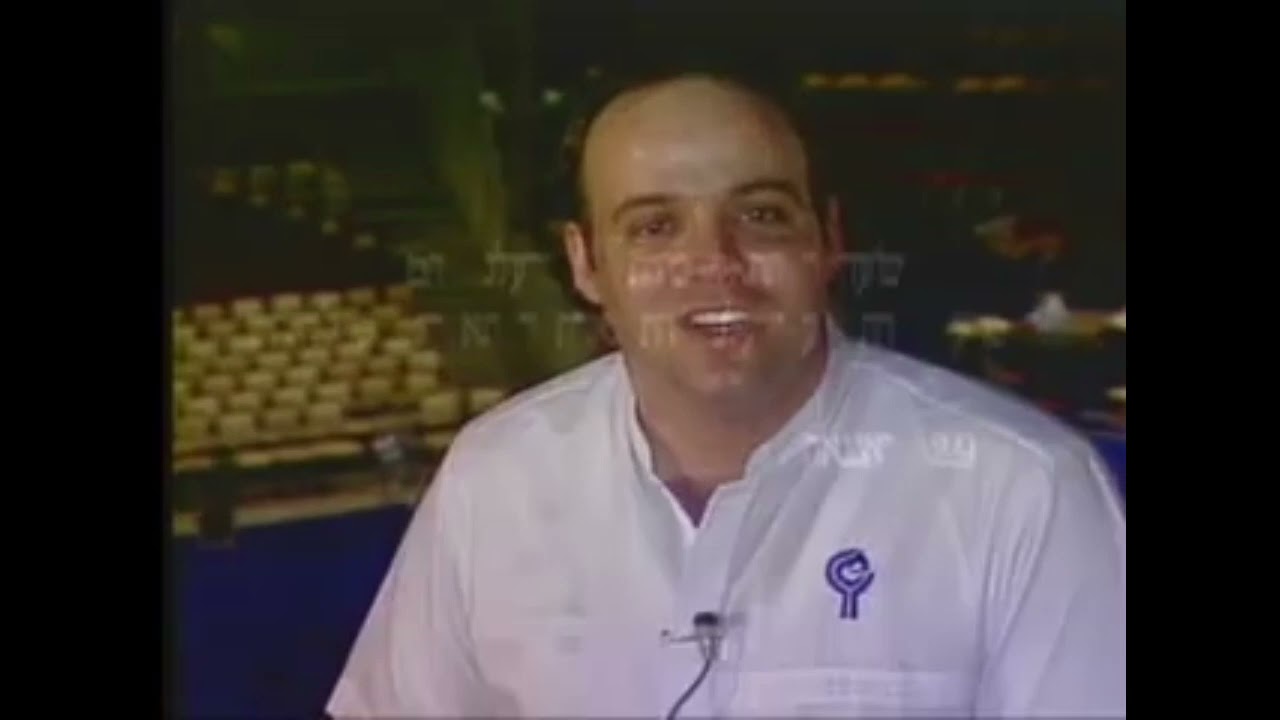 Founded in the 1950s by Dr. Lester Sumrall, the Cathedral of Praise stands as a living testament to God's abounding grace and faithfulness. Starting from a modest congregation and nothing more than a handful of pews, the church has grown tremendously over the years.
1954
The Breakthrough
The Deliverance of Clarita Villanueva, and Six-Week Crusades at the Sunken Garden, Manila 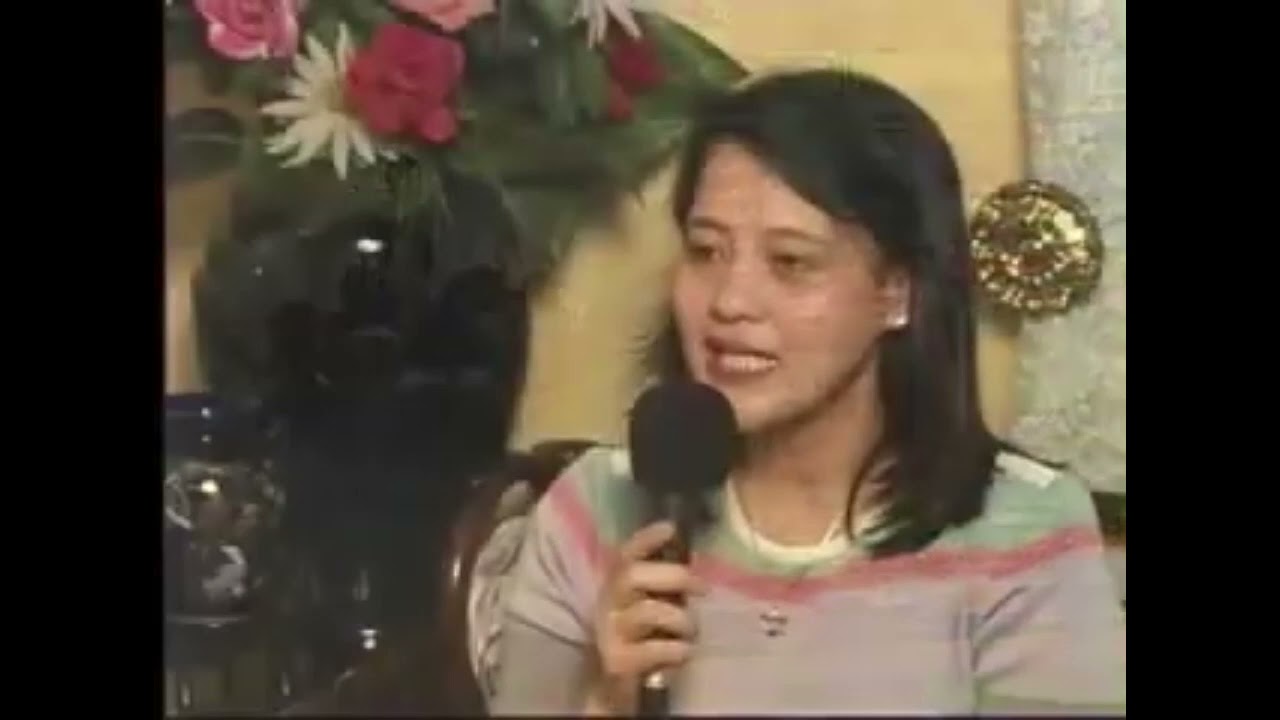 The breakthrough began with one powerful miracle, where God changed the course of the city of Manila forever. This was the story of a seventeen-year-old girl by the name of Clarita Villanueva, who was delivered from demon possession through the ministry of Dr. Lester Sumrall. This much publicized move of God opened doors for the ministry, as the mayor of the city of Manila himself gave Dr. Lester Sumrall an extended permit to hold crusades in the Sunken Garden right in front of the city hall.

And so, in an intensive six-week crusade, Dr. Sumrall, together with Reverend Clifton Erickson and Doctor Oral Roberts, preached the message of Salvation to hundreds of thousands who accepted Christ, received their healing and answers to their prayers.

These miracles not only led multitudes to Christ, but also launched the church into its next level of growth as it transferred to its new building along General Luna in 1954.

As Dr. Lester Sumrall was called to the work of God in other parts of the world, several short short-term pastors came to what become Christ Is The Answer, Manila Bethel temple Incorporated.

Then, from 1965 to 1980, Reverend Daniel Morocco and his wife Esther were the pastors. The Moroccos had previously pastored in Cebu and in India. Tatay Morocco with his booming tenor voice, with Nanay Morocco by his side, was faithful to the Lord and to the church through thick and thin during these fifteen years. 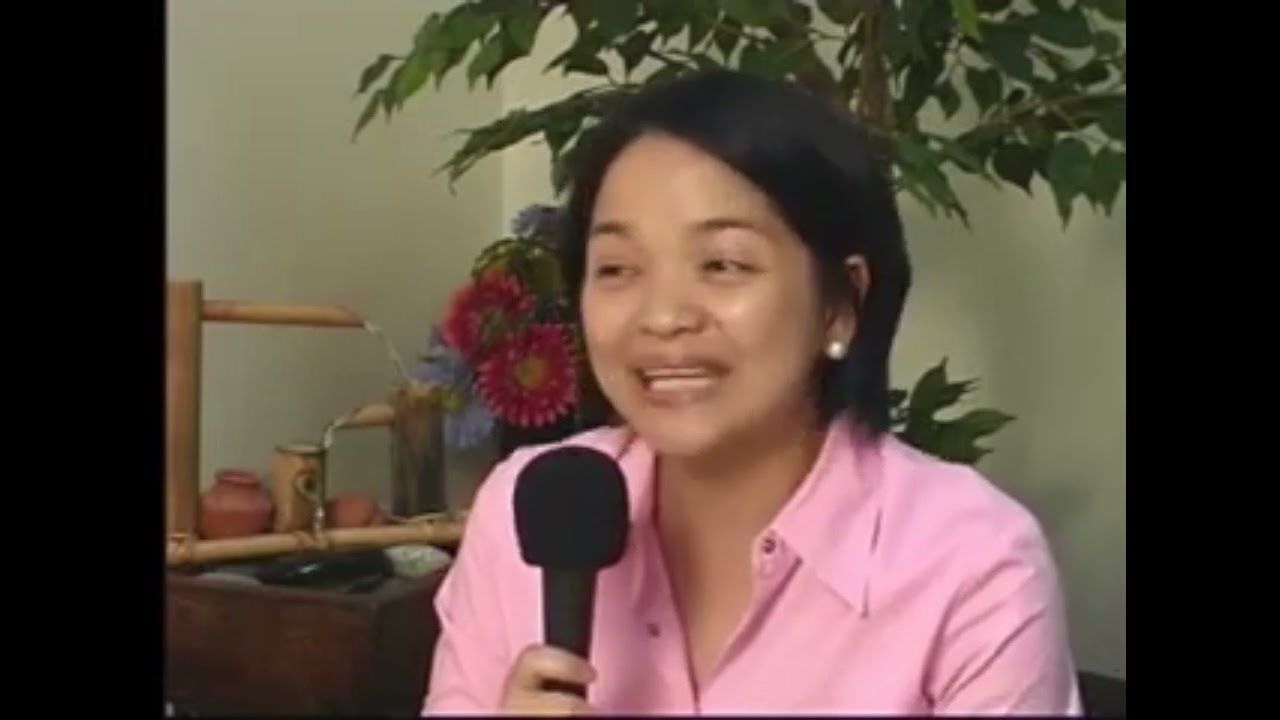 The year 1980 became training for the church, as Pastor David Sumrall and his wife Sister Beverley arrived as evangelists to the Philippines. Prompted by the Lord, the Moroccos retired to a chaplaincy in the US and passed on the church leadership to the Sumralls once again.

At this point, Pastor Sumrall did not lose any time in setting up new ministries that would revolutionize pastoral care and services throughout the Christian Community. 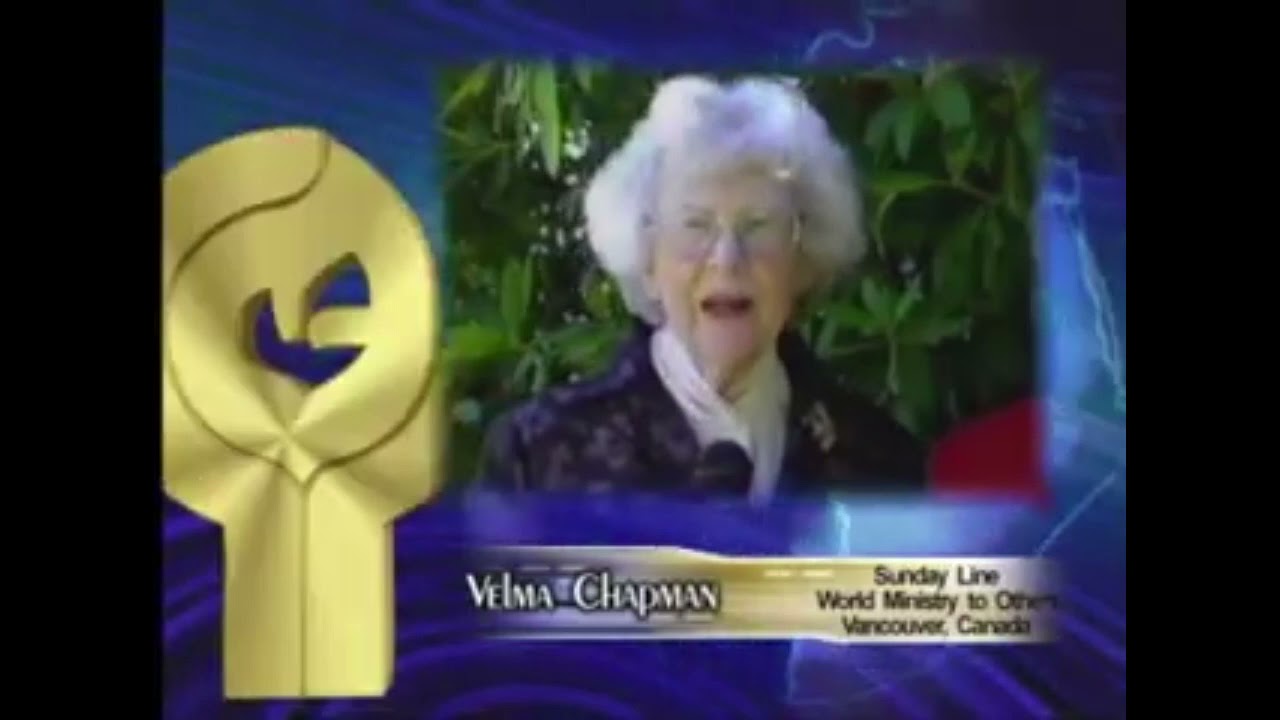 1983 witnessed the moving of the church to its temporary place at Robinson's Commercial Complex, while the construction began in our new complex. By this time, the membership had grown to over 4,000 members from 1000 when Pastor Sumrall took over only three years earlier.

And within a span of just another two short years, the church paraded along the streets of Manila from Robinson's Complex to its new and partially completed auditorium along Taft Avenue, on Christmas Eve of 1985. That moment marked a new chapter in the history of the church, when Manila Bethel Temple now became the Cathedral of Praise. It was 1988 when the entire Cathedral of Praise family celebrated the dedication of its new building.

Even during the early days with the Moroccos, the music ministry of the Cathedral of Praise caught the attention of church-goers and non-church goers alike, because of its unique and contemporary sound. By April of 1987, the Cathedral of Praise Music College was established as it sought to develop and maintain creative excellence in all aspects of music ministry. The COP Music College was a Pioneer in the field of church music for all of Asia.
1995
The Great Revival
The Revival of May 1995 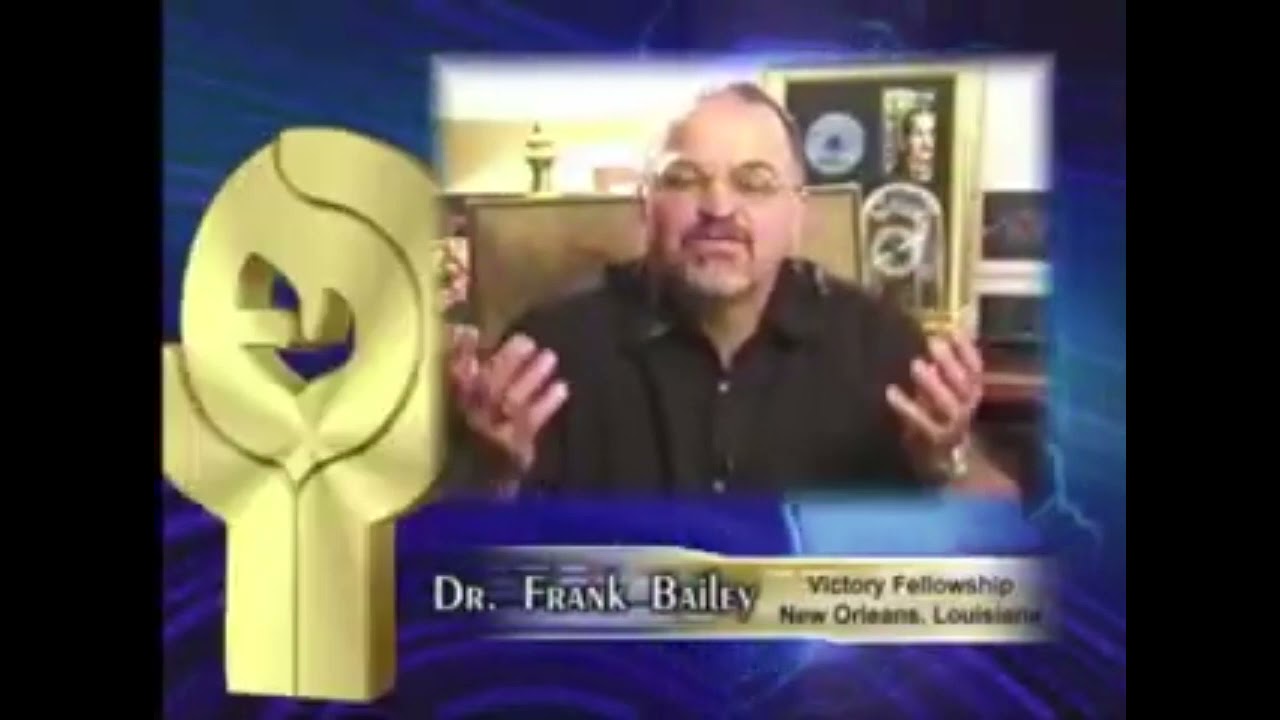 Yet amidst all the great things God had already done for the Cathedral of Praise, nothing had quite prepared the church for the mighty outpouring of the Holy Spirit, as the great Revival of May of 1995 swept through the entire church. Lives were changed. Relationships were restored. Sicknesses and diseases where were healed, and the blessings and prosperity of God flowed.
1995 - 2000s
Crusades in Metro Manila and Beyond
Tent Crusades in Philippines and Beyond 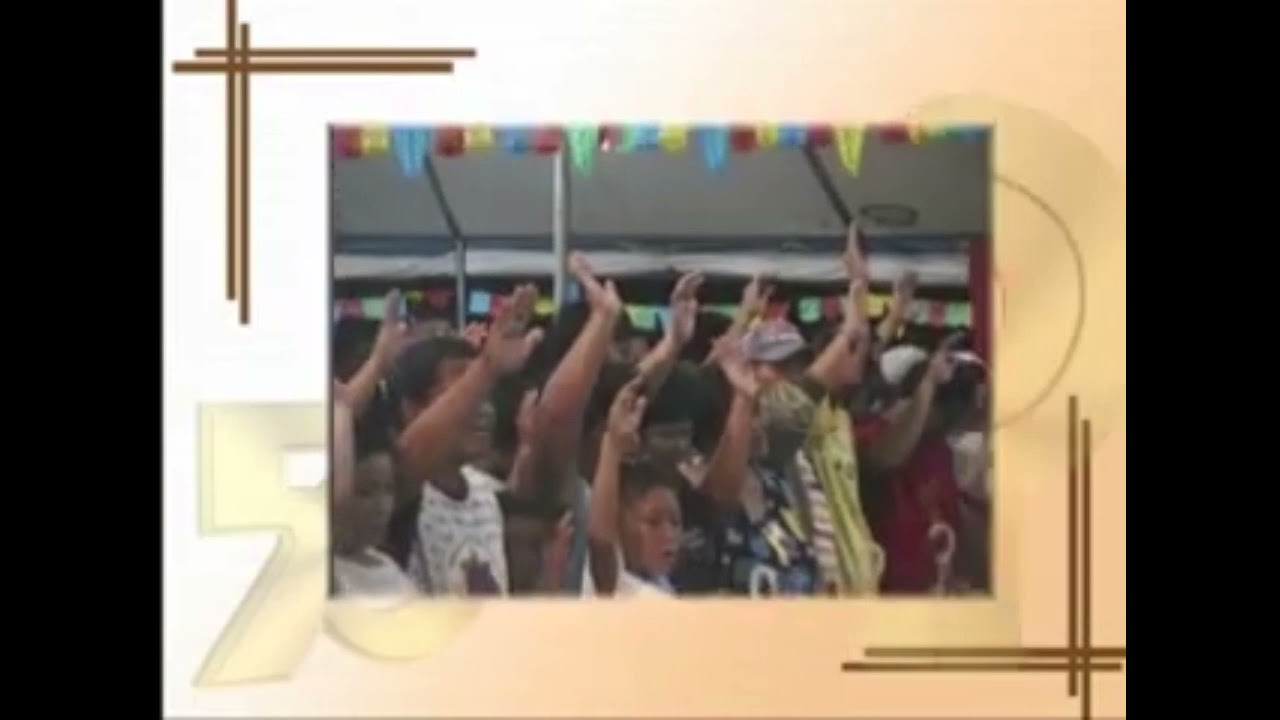 The revival was just the start of a great move of God that launched the Cathedral of Praise Outreach within the Philippines and to our neighboring countries as well. Four years of continuous tent crusades at home coincided with years of crusades and mentoring in Hong Kong, Japan, Malaysia, Singapore, as far away is India, even Bulgaria. 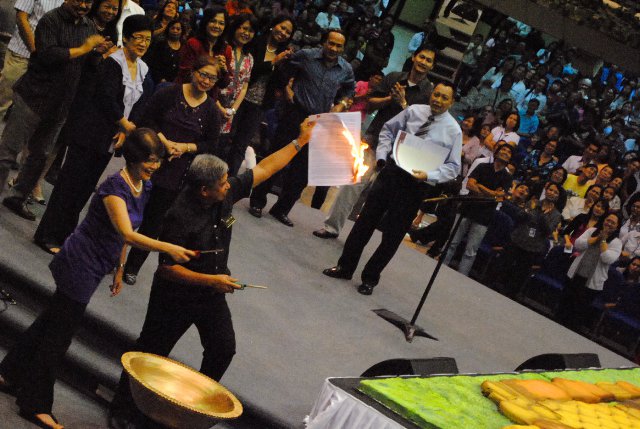 On January 14, 2011, Cathedral of Praise finally became debt-free. In Proverbs 22:7, the Word of God says, "...the borrower is the slave of the lender."  Now that the church's debt was paid, COP was now able to focus more of its finances towards church-planting.

The "death of debt" was celebrated by burning the deed of mortgage and thousands of people eating pieces of a 19-foot Goliath-shaped cake (Goliath having personified the sizable debt that had kept the church in hock for years). And at the church grounds, is a tombstone for "Goliath" which represented debt: a memorial for all generations of how God delivered us from the bondage of debt.

With a vision to “Build 200 churches in the next 20 years”, COP is well on its way to doing just that. To date, churches in Bataan, Batangas, Laoag, Cebu, Davao, Lipa, Bulacan, Olongapo, Pampanga, Hawaii, Abu Dhabi, and Dubai have already been planted.

COP has always been about teaching and living the Word of God. This has led to the establishment of numerous ministries that work hand-in-hand for a sole purpose of winning every person for Jesus. One of which is the DAILY MANNA Foundation – a feeding program that provides meals to at least 2,000 kids and their families, in the poorest parts of Manila every single day, rain or shine. 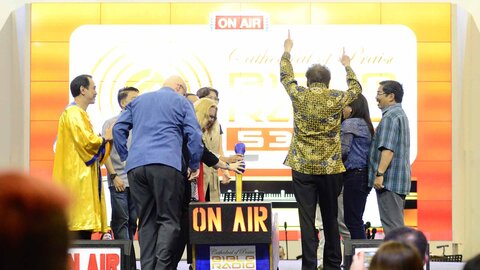 Bible Radio is a non-profit AM Radio Station that aims to cover the Nation and the World with the Gospel through programs about Jesus and His Word – made with love by the committed volunteers of the Cathedral of Praise Manila.

Preach publicly and from house to house

We know that, like the apostles, we are to preach the gospel publicly and from house to house. It is a privilege to be in your homes, sharing the gospel.​
Acts 20:20

Teach the Word of God

Preach the good news to the poor

Heal the sick in Jesus Name

The good news and the power of God

We know that the message is the Gospel. We love it, we live it, and we preach it. It is the good news, and it is the power of God unto salvation for those who believe.​
John 3:16, Rom 1:16

We serve Him fervently

We know that we have been called by God to be priests. We are to serve Him. We don’t live in our own little world, we serve Him fervently until every lost person is found. We will build 200 churches across our land and across the world in the next 20 years.
Rev 1:6

We know every member has been given the Great Commission. So we joyfully work while it is yet day – seeing people born again, baptized in water, baptized in the Holy Spirit, and learning to live for God.​
Matt 28:19-20, John 9:4

Go to the harvest field

We know that we are to bear fruit and not to gather fruit. There is no shortage of people that need to hear the Gospel. Our joy is to go to the Harvest, and bring the harvest field unto the Lord.​
John 15:5, John 15:8

We praise the Lord

We know that the tithe is not about obedience to the law. It is before the law, during the law, and even Jesus taught tithing! It is our joy to bring the whole tithe into the storehouse, to the Lord.​
Mal 3:10

Our Father is our Provider

We know prosperity is about trusting our Heavenly Father for everything we need! No fear of debt, no fear of poverty, no fear of people! Our Father is our Provider!​
Matt 6:25-26

One family in Christ

We know that Jesus taught us to pray, “Our Father”. That means we are part of a great family of God across this world. When one part of that family needs help, it is our role to freely give as we have freely received.​
Matt 6:9, Jas 2:16