“Month after month we looked forward to the results of pregnancy test kits, and both experienced the agony of false alarms.  This took an even greater toll on my wife when, after tests done on me showed that I had normal conditions.  There were times my wife cried rivers of tears and I ran out of words to comfort her – except that we both kept on holding on to God’s glorious promise upon us”

Read on and join bro Alex Dela Cuesta as he recalls God’s faithfulness in his family’s life.

“Most married couples would probably expect to have a baby within the first year of marriage, and I have no problem with that.

However, we were quite sure of not being prepared to face the fact that having a baby is not as easy as counting one, two, three! We thought deciding to live together under one roof for the rest of our lives required a major adjustment from our seasons of singleness, something we thought we really wanted to savor for a while before facing an altogether new set of adjustments that are inevitable with the arrival of a baby.  Besides, my wife’s obstetrician/ gynecologist advised that she needed to treat her endometriosis first.

So my wife took contraceptive pills for almost six months and, thankfully, the aforementioned condition was treated and her periods became regular.  However, when she finally stopped taking the pills, she gained a lot of weight and so she was advised to lose the extra pounds first if she wanted to have a baby.  That meant experimentation with various modes of dieting, and worse, taking several prescription drugs.

Before long, my wife had undergone two OB procedures, experienced bad side effects of one of the drugs, and yet there seemed to be no progress.  Month after month we looked forward to the results of pregnancy test kits, and both experienced the agony of false alarms.  This took an even greater toll on my wife when, after tests done on me showed that i had normal conditions.  There were times my wife cried rivers of tears and I ran out of words to comfort her – except that we both kept on holding on to God’s glorious promise upon us:

On our second wedding anniversary, we were so blessed to have heard a wonderful testimony shared by our guest, Pastor Joe Cruse, of a couple in the USA who were also childless for several years, but to keep their faith for a miracle, they were advised to buy a set of clothes for the baby they were believing to have, and hang it at a place in their room that they could see every day so they would not forget it.  Pastor Joe said that the couple did as they were told, and not long after, the wife conceived!

That same day, the 12th of May 2014, we bought this for our soon-to-come son, whom we will name NEHEMIAH MANLAPAZ DELA CUESTA or NEO.  My Facebook post below will always remind me and my wife of that giant step of faith we took that day. 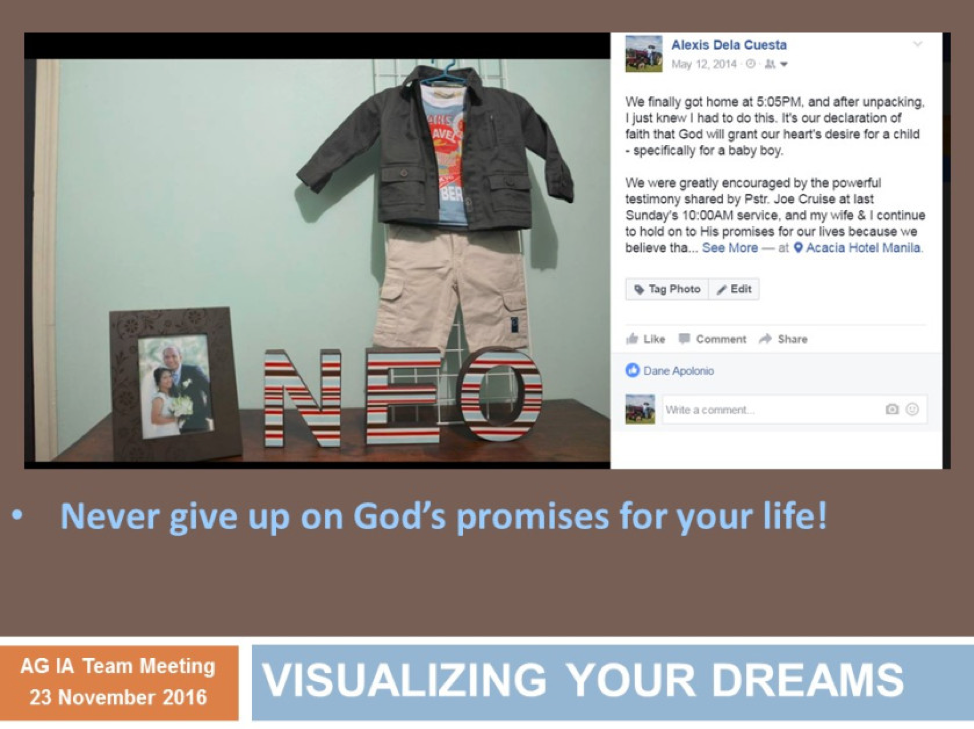 Those who have heard (or read) about what we did had mixed reactions.  While most of them were excited, there were some who were just being polite but we could see in their faces that they seemed to be asking, “Are you nuts?”.

That was May 12, 2014.  A few months after that, we decided to seek a new OB and she gave an altogether new regimen for my wife.  Almost a year later, there still seemed to be no progress.  Even after a series of separate tests done on me.  My wife came to a point of nearly being depressed and she felt so tired of taking all the medicines prescribed to her.

Towards the end of 2015, we decided to try an advocate of natural medicine and we were each given our own set of regimen.  These, plus exercise and a conscious decision to avoid pork and beef, we hoped, would prepare us physically.

But then again, after another year, nothing happened.  We still kept on seeing those set of clothes every day and kept holding on to His promises for us.  In our devotions too, God constantly reminded us that He is faithful to fulfill His promises.  Our pastors and dearest friends also constantly encouraged us and prayed for us.

Yet, when we were again all alone at our modest two-storey home, there were nights when we longed to hear the laughter of even just one child.  My wife finally broke down one afternoon, and I thank God I was able to console her.  A few days later, one of our beloved pastors visited us, and she reminded us to trust God’s purposes and plans for our lives and to keep busy serving Him and His great people as we waited for their fulfillment.

We did just that and by the end of 2016, we were already firm on joining our church’s annual Israel Tour in 2018.  We have saved up for this adventure of a lifetime for the past three years and have in fact signed up in the first part of January 2017.

“Malay natin honeykoi, Made in Jerusalem si NEO!” I kept teased my wife.  Our other friends, five couples, were all too excited for what would definitely end up as our most memorable getaway ever.

Suddenly, to cut the story short, on the 25th of February 2017, my wife broke out the most pleasant news of the positive result of her pregnancy test kit while I was on fieldwork in Sarangani!

Four days prior to that, she was already delayed by two days, and I pleaded with her to wait until I returned from that week-long trip so I would not miss that moment.  However, she said she really felt so uncomfortable the night before so she did it without me.

I’ve never felt such joy before!  Even more when we first heard our baby’s heartbeat! 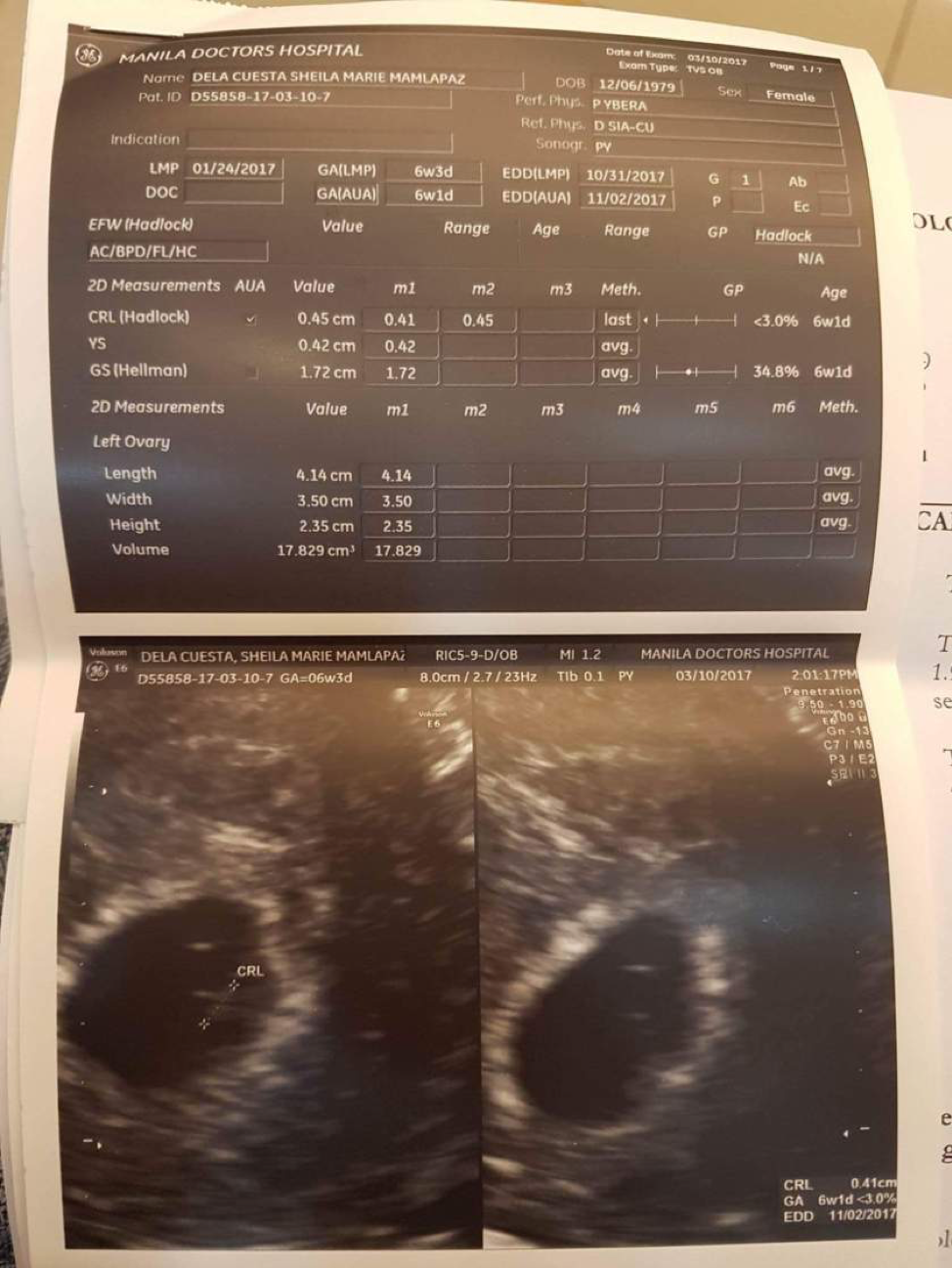 Our God really knows what’s best and He is never early, never late.  Today, our baby is exactly 15 weeks old and both of us are getting more and more excited each passing day.

What a pleasure to be blessed with one precious treasure from the Author of Life – our Almighty God.  What an awesome way to celebrate our fifth wedding anniversary indeed! To You alone be all the glory and honor and praises!

We also would like to express our utmost gratitude to our families, friends and pastors who have kept on encouraging us and who stood by us through all these years.  We love you and we are forever grateful to God for allowing you to be part of our wonderful journey!  Kindly keep my praying for my wife and our baby to be strong, healthy and safe until full term.  Thanks a lot and God bless!”

We’d love to hear and feature your testimony! Send it to gsnealega@cathedralofpraise.com.ph.